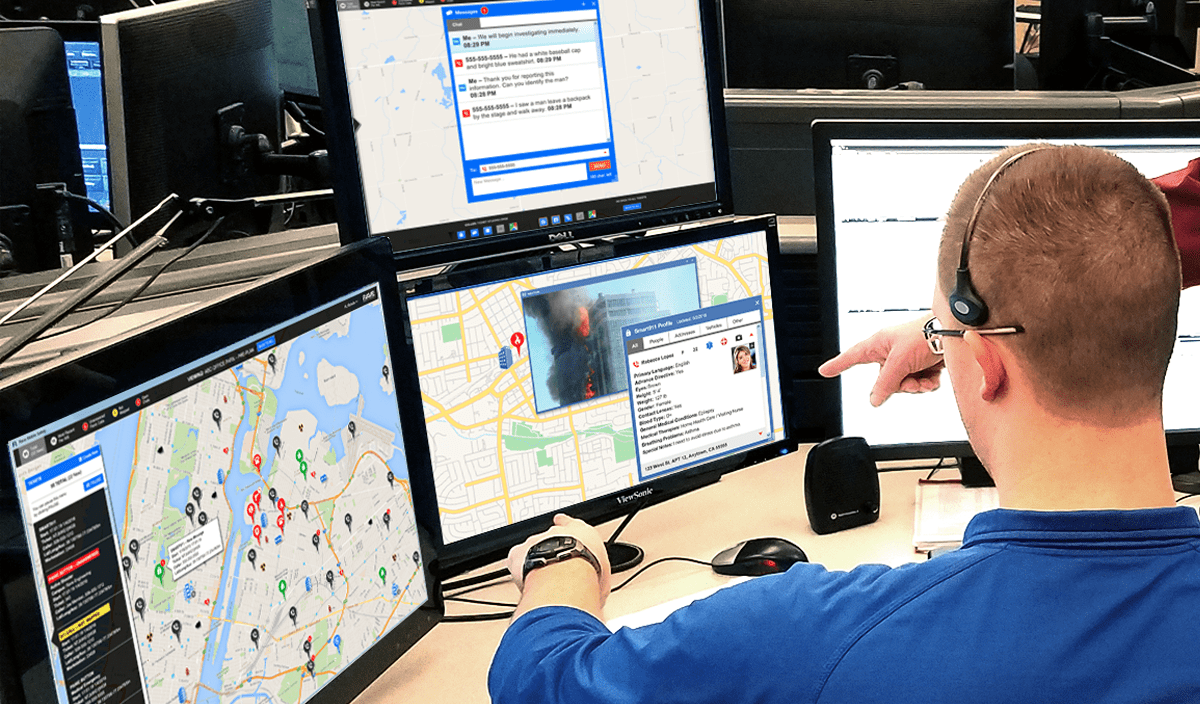 As the Sumter County Communications Center was moving into a new facility in 2017, it was an opportunity to enhance how the center’s 9-1-1 dispatchers managed incoming calls and communicated with first responders. The center already had Rave 911 Suite, which is part of a critical communication and collaboration platform that allows 9-1-1 teams, first responders and emergency managers to handle, dispatch and respond to emergencies more efficiently and effectively.

“There was a heavy focus as we moved forward to integrate Rave 911 with our existing computerized dispatch center, as well as bring it to the forefront of our dispatcher’s day-to-day life,” said Stephen Kennedy, Assistant County Administrator, Board of Sumter County Commissioners. Kennedy also serves as the 9-1-1 coordinator.

The 9-1-1 team is housed with the public safety agency within the Sumter County Communications Center. The 9-1-1 team handles about 57,000 calls a year, averaging about 167 calls a day, according to Kennedy. Calls have been increasing about 10% every year, which he attributes to the county’s population growth.

Sumter County is in central Florida, located between Orlando and Tampa. The county has several cities, including Bushnell, Center Hill and Wildwood. The county has over 133,000 residents, growing steadily over the last 10 years.

“Oftentimes, the person who’s in need isn’t necessarily the person who’s calling us,” he said. “It may be their spouse, loved one or a neighbor, and they may not have all of that information readily available. That helped us right off the bat to get Smart911 out to the public. This wasn’t a replacement for those other programs. It’s another tool in the toolbox.”

Smart911 is a community registry portal where residents can fill out personal safety profiles, including their home address, names and pictures of family members, and medical needs.

Residents can also add door access information to indicate they may have challenges opening the door for first responders. They can sign up for notifications and create these profiles through the portal or a mobile app, which feeds critical data to 9-1-1 teams through the Rave 911 Suite.

“There was a big push to get the Smart911 program out and once folks realized they can put as much or as little information in there as they wanted, it was very successful,” Kennedy said. “It really gave them ownership.”

He also said the Smart911 program helped alleviate 9-1-1 call dispatchers from documenting individual’s personal data. Sumter County residents must add any special details to their personal safety profiles and dispatchers will automatically receive that information when residents call in.

The 9-1-1 call dispatchers and law enforcement officers have bolstered their emergency responses, leveraging information through the Rave 911 Suite.

“People with medical conditions sometimes wander away from their home and we would have to figure out how we’re going to get a readily available photo of somebody, so we can distribute it to law enforcement officers to be on the lookout for someone,” Kennedy said. “In the past, they drove to the house, got a general description and put that description out.”

“Now we can take that picture of someone and send it agencywide while first responders are driving to the call for the first time,” he continued. “It allows us to harness this information and share it before we even get on scene.”

Kennedy said the information gathering that 9-1-1 call dispatchers do with an incoming emergency call has helped evolve the entire role. “They’re doing the initial reviews and updates, so they’re the eyes and ears of first responders before they get on scene,” he said.

Call dispatchers and first responders also now have accurate information about the location of emergency calls. Kennedy estimated the 9-1-1 center receives about 75% of their calls from people calling from mobile phones.

Mobile callers need to provide their location information because the call’s signal is from the strongest cell tower, not necessarily the closest. It inadvertently places the caller miles away from where they actually are.

Rave 911 Suite integrates with RapidSOS, providing a more enhanced location from a mobile phone to 9-1-1 centers. RapidSOS is a company that directly links precise location data from mobile phones to 9-1-1 centers. Call dispatchers and first responders can view the exact location of the device, speeding up response times.

The 9-1-1 team has also strengthened information sharing with the Sumter County School District. The Sumter County Sheriff’s Office and the School Board of Sumter County implemented the Rave Panic Button to staff members in nearly 20 buildings across the school district in 2018.

“With this information going into the Communications Center, it allows us to have a readily standardized response and have the right resources for each event,” Kennedy said. “From our perspective, that integration allows us to not only get the notification of the call and location, it starts to trigger a notification on that campus about the type of emergency.”

“That’s a really big piece for first responders where too often historically the question is who is making the call,” he continued. “For example, it’s not uncommon to get a notification that isn’t from a classroom. It’s from an administrator on campus or the front desk making the request. That request is coming from a different building or a different room where the incident is occurring.”

Prior to implementing the Rave Panic Button, Kennedy said it would be challenging for first responders to know the exact location and specific details of an emergency on a school campus. In the meantime, call dispatchers might be inundated with calls about the same incident. This could delay dispatchers passing information along to first responders, slowing down their response time.

“Now we’re in a position where we’re more proactive to start sending resources to that campus for any type of emergency,” he said. “We have a higher degree of confidence that when an event occurs at a school, we’re getting a timely notification. We have a good resource to go back to say who made the request and where’s the classroom. It really has made us far more efficient to get the right help to make a difference.”

Middlesex Health was searching for ways to improve the safety…