Will People Still Mask Up Following the CDC’s Revised Guidance?

When the Centers for Disease Control and Prevention (CDC) revised its guidance relating to masks, social distancing, and testing for fully vaccinated people, many organizations expressed concerns that the revised guidance would lead to a new wave of coronavirus infections. However, at the time of writing, a new wave has not materialized. The reason? Common sense.

On May 13th, the CDC published revised guidance relating to COVID-19 mitigation strategies for fully vaccinated people. The guidance stated people were considered to be fully vaccinated two weeks after receiving a second dose of the Pfizer, Moderna, or AstraZeneca vaccine, or a single dose of the Johnson & Johnson Janssen vaccine.

According to the CDC, fully vaccinated people could choose to “resume normal activities” without wearing a mask or social distancing subject to federal, state, local, tribal, or territorial laws and regulations imposed by businesses and workplaces. Certain exceptions existed, such as the requirement to wear a mask when traveling on public transport.

A few days later, the CDC further revised its guidance stating that fully vaccinated people no longer needed to self-isolate or get tested after being in close contact with somebody diagnosed with COVID-19 unless they themselves later developed symptoms.  It was also no longer necessary for fully vaccinated people to automatically quarantine after arriving in the United States.

Following the revised guidance, many states, businesses, institutions of Higher Education and other organizations announced they were relaxing their COVID-19 mitigation strategies to allow people who have been fully vaccinated to “return to safer activities” without the need to mask up, maintain social distancing, or undergo post-exposure testing.

Multiple health experts – alarmed at the perceived rush to relax COVID-19 mitigation strategies – expressed concerns that checks were not being made to ensure people claiming to be vaccinated actually were, and that businesses, institutions of Higher Education and other organizations were relying on an “honor system” to safeguard vulnerable members of the community.

The concerns were increased when several surveys found one-in-four unvaccinated people were not intending to wear masks in public indoor spaces – prompting headlines that the guidance applies to fully vaccinated people and liars. A number of leading unions strongly criticized the revised guidance, while online petitions were launched to pressure the CDC into reversing its revised guidance. 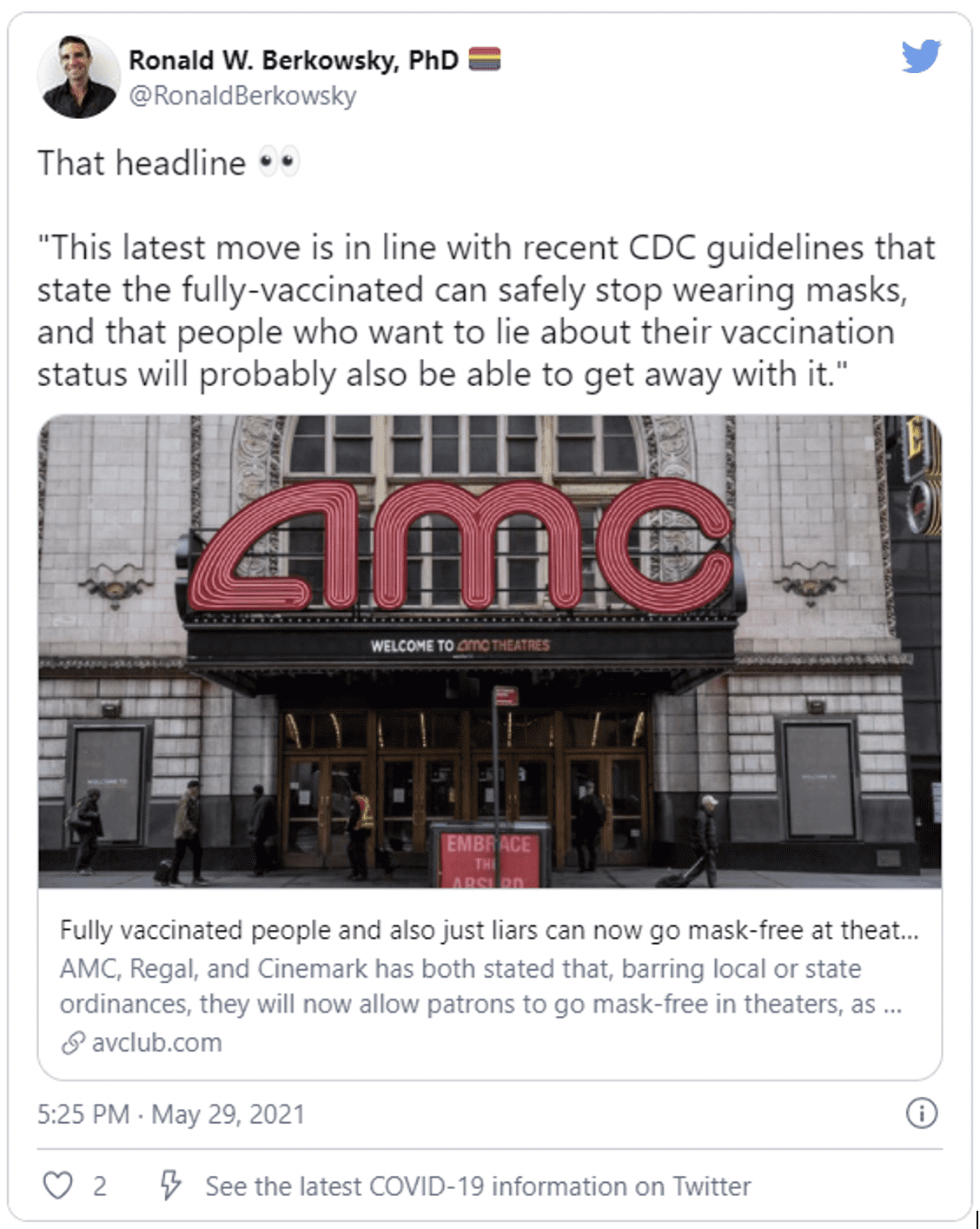 Although the CDC’s revised guidance did lead to a brief uptick in vaccinations, only 10% of unvaccinated respondents to Kaiser Foundation survey said the revised guidance would influence their decisions whether to get vaccinated or not.  Only 8% said they would definitely vaccinate their children, compared to 46% of vaccinated parents who were keen to protect them against the virus.

Despite Concerns, the Sky Hasn’t Fallen Yet

Despite concerns of another COVID-19 wave, there has not been an uptick in infection rates since the CDC’s revised guidance. Indeed, according to the New York Times COVID Tracker, the average number of cases across the country has fallen. While this could be attributable to the vaccine roll out having an impact, there is a more likely reason – common sense.

Data in support of this argument comes from Texas, which was the first state to lift mask mandates in early March. According to a report compiled by the National Bureau of Economic Research, the relaxation of COVID-19 mitigation strategies had little impact on social mobility, economic activity, or coronavirus infections.

The report’s authors concluded that “individuals’ social distancing behaviors and activity patterns are more a function of their private voluntary responses to perceived risk” – meaning that individuals were choosing to wear masks and maintain social distancing even though they were not required to by law. The Atlantic summed up the findings as follows:

“Governors don’t reopen or close economies. The CDC doesn’t put masks on or take them off citizens’ faces. A small number of elites don’t decide when everyone else feels safe enough to shop, eat inside, or get on a plane. People seem to make these decisions for themselves, based on some combination of local norms, political orientation, and personal risk tolerance that resists quick reversals, no matter what public health elites say.”

Texas Experience Repeated Around the Country

Outside of Texas, further surveys and reports demonstrate that people are still masking up even when they have been vaccinated. A poll conducted for Vox.com found the majority of respondents wore masks to protect themselves and others – despite the CDC’s guidance claiming COVID-19 vaccines were effective at protecting individuals and transmitting the disease.

Commenting on the results of the poll, one expert suggested the reason people are continuing to mask up is a lack of trust in guidance from institutions such as the CDC – a suggestion supported by the results of our own survey earlier this year which found only 22% of respondents completely trust the information they receive from local officials.

One of the reasons why individuals have a lack of trust in official announcements is the way they are delivered. Our survey found that 50% of respondents would be more inclined to trust official announcements if they came directly from officials (rather than via the press or social media), while more than a third would prefer personal communications via text, email, or voice.