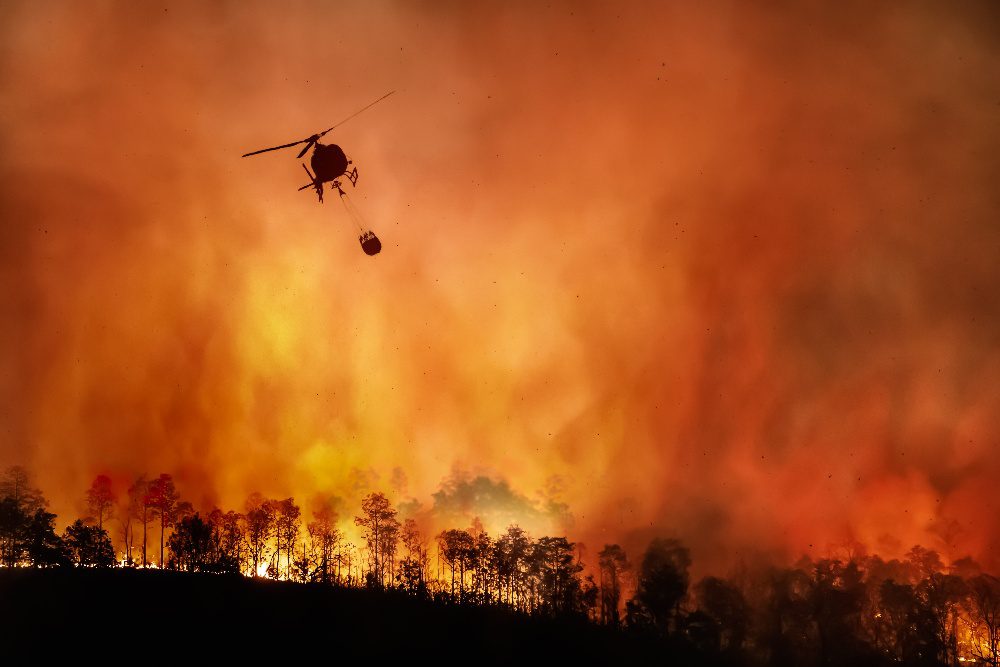 In September, major wildfires broke out across California, Oregon, and Washington, resulting in the worst fire season on record, according to the New York Times. The season was indicative of a decade-long trend toward worsening wildfire seasons caused by global climate change, which is ushering in hotter, drier conditions. While state and local officials are looking toward mitigating the effects of drought, updating fire management policies, and limiting construction of homes in fire-prone areas, technology can also play a role in improved wildfire response.

Firefighters are increasingly having access to innovative solutions to assist before, during, and after wildfires, from artificial intelligence to a vulnerable needs registry. These are necessary updates, as firefighters more often being put in the path of devastating fires - in California Oregon, and Washington, over 5 million acres of land burned as of September 24, destroying thousands of buildings, forcing millions on the West Coast to breathe unhealthy air, and leaving two-dozen people dead.

These increasingly challenging wildfire seasons require a stronger, more coordinated response, and technology can help mitigate the risks for both responders and residents. Technology can play a role in every stage of wildfire response, communicating the risks to homeowners at the start of the season, helping spot and extinguish the flames early, getting supplies to first responders during a major blaze, and identifying impacted areas to facilitate resource distribution in the aftermath.

What Innovative Firefighting Tools Are Being Used In 2020?

Extreme wildfires are not going away - nearly 20% of the fires this year were burning in areas that had been impacted by fires as early as 2000, as per the New York Times. State and local leaders should explore all technological solutions, from artificial intelligence, which is being used to scan and spot wildfires before the blaze gets out of hand, to autonomous drones that carry hoses to less accessible areas.

Throughout the 2020 wildfire season, artificial intelligence has been used to analyze massive quantities of video or imaging data collected from space satellites, as per GovTech. Wildfire spotting is not a new practice - for decades, the task was conducted by people in lookout towers, who scanned the horizon with binoculars for smoke. Now the thermal imagery collected by satellites, mountain top cameras, and weather stations, is being sifted through by artificial intelligence tools programmed to identify hot spots or risks.

The high-tech tools have significantly improved fire spotting, making it safer, more accurate, and faster. This will not only make firefighters more nimble but also avoid putting them at unnecessary risk. Brice Bennett, a representative for California Fire Departments, noted that the technology, “is helping us fight more-aggressive fires more aggressively with a calculated level of safety,” as per GovTech. He added: “Fire-line commanders utilize intelligence from all these different inputs. Situational awareness is paramount, fully understanding the events unfolding around you, not just what’s directly in front of your face but what will occur in the next 12 hours.”

Since manned aircraft are expensive, incurring costs with crew maintenance and training, many fire command and control centers are turning to UAVs, or drones, to keep costs down, take advantage of additional capabilities, and avoid putting aircrews at risk of smoke inhalation, as per Discovery. The onboard high-definition cameras allow crews to provide direction to firefighting teams on the ground, spot vital infrastructures such as power or water lines, and identify dangerous or explosive objects. UAVs also provide aerial images, heat maps, or temperature scales of fire zones, and some can even be used to deliver resources, such as hoses, to firefighters in remote areas.

The kits that firefighters are bringing into fire-zones have also been improving. Many firefighters now carry fire blankets that can withstand temperatures up to 3,000 degrees, though these items are often a last resort and reserved for first response firefighters who jump into wildland fires, known as smokejumpers, as per Discovery. Additionally, robots are being used to scan areas, and potentially deliver additional resources to firefighters struggling to battle a blaze.

In 2019, California invested in several new innovative wildfire technologies, including a wildfire analysis platform that uses mapping technology like satellites, as well as geospatial information systems, to a wildfire’s path, as per StateScoop. The system will use modeling that accounts for various factors, such as topography, current or forecasted weather, and regional vegetation. Governor Gavin Newsom issued a press release following the rollout of the technology, noting that the state was hoping the ability to predict a pattern of a wildfire can mitigate the damage, saving more lives and homes.

Unfortunately, many first responders worry that in these areas fire response communication systems are still stuck in the past, with inadequate capability for firefighters to communicate internally and with surrounding communities, as per The Guardian. Government leaders should make sure they have a robust communications strategy ahead of the wildfire season, both to boost internal communications and proactively reach community members.

In recent years, communication failures have further complicated wildfire response. In 2017, residents in California reported that the lack of effective communication prevented them from knowing the fire was moving closer. The state was still using a system that will call landlines in affected areas, but due to the ubiquitousness of mobile phone technology, many households no longer had one. Additionally, leaders did not do an adequate job signing residents up for mobile alerts and had no plan when the fires knocked out 77 phone towers. Instead, many residents waited until ash was falling in their yards to evacuate.

A mass notification system is an essential tool for state and local leaders to manage wildfire response. Templated messages and targeted communications can be helpful for planning communications for the wildfire season, allowing administrators to issue pre-written messages quickly via text, voice call, social media, digital signage, or any other relevant platforms during an emergency. For example, administrators can set up a preset “Wildfire Alert” message, informing recipients of what to do if they are in the path of a wildfire, where to go in case of evacuation, what essential resources to grab in a “go-bag” and what to leave behind.

A vulnerable needs registry can also help first responders throughout wildfire season; both in communicating with and evaluating individuals with additional access needs, and preventing any fire fighting measures, such as power shutoffs, from causing unnecessary harm. The digital registry will increase firefighters’ situational awareness, providing critical data on who vulnerable community members are and where their homes are located. If a power shutdown or wildfire is threatening a certain region or neighborhood, first responders can verify with the registry who is at-risk and proactively communicate or coordinate with these individuals.