The 9 Best Medical Television Shows of All Time

Medical television shows have been captivating people for close to 50 years. The intrigue of an emergency room, surgical unit, and the day-to-day lives of doctors and nurses draws in some of the highest viewership in all of broadcast television.

There are some real life consequences with some of our favorite medical dramas. Workplace violence is a real threat in the healthcare industry. Unfortunately, 96% of male nurses and 85% of female nurses have reported being threatened by their own patients. The healthcare industry also has some of the lowest workplace violence reporting rates, as many nurses and doctors see the abuse as common and “part of the job.”

While some shows are able to depict the industry like it is, and some add a dramatic or comedic twist, all healthcare TV shows have some educational factor to them. Medical shows help to normalize hospitals, doctors, and nurses, as well as get people interested in practicing medicine themselves.

Here are nine of our favorite medical shows:

Based on the memoir, Twelve Patients: Life and Death in the Bellevue Hospital, this show is set in one of the oldest public hospitals in the United States. New medical director, Dr. Max Goodwin, is set on tearing up the bureaucracy to provide the best care to patients. Dr. Goodwin must disrupt the status quo and prove he will stop at nothing to breathe new life into this understaffed, underfunded and underappreciated hospital. In this series this hospital is the only one in the world capable of treating Ebola patients, prisoners from Rikers Island and the president of the United States under one roof – and return it to the glory that put it on the map. Unlike other medical dramas, New Amsterdam really focuses in on the care of patients and real struggles many hospitals face.

This medical show has been applauded for inclusion on-screen representation. Shaun Murphy, an autistic surgeon with savant syndrome joins the surgical unit at San Jose St. Bonaventure Hospital (a fictional hospital set in San Jose, California). Shaun has trouble connecting with those around him, and with a troubled childhood, finds himself alone in the world. Yet, that does not stop him from using his exceptional skills and medical intuition to save others.

With 15 seasons, “ER” became the second longest running primetime medical drama in the United States. Based on a fictional hospital in Chicago, the show follows doctors through the busy emergency room. Author Michael Crichton used his own experiences as a medical student in an emergency room to develop a book that later made its way to television. Crichton is also the author of Jurassic Park.

Emmy-award winning Executive Producer Dick Wolf’s “Chicago” series, has many well known and developed characters with good story lines. Following “Chicago Fire” and “Chicago PD”, the emotional thrill ride “Chicago Med” takes viewers through the day-to-day chaos of the city’s newest trauma center and into the lives of the courageous doctors, nurses and staff who hold it all together. The doctors and nurses confront Chicago’s most critical medical cases and challenging ethical dilemmas with courage, compassion and state-of-the-art treatment.

As one of the highest rated television shows in the United States, “M*A*S*H” is marked forever in television history. 106 million people tuned in to watch the series finale in 1983, having fallen in love with the medical comedy drama. The movie came first in 1970 and was based on the book, MASH: A Novel About Three Army Doctors. It was adapted to television in 1972 and focused on a team of doctors and support staff stationed at the 4077th Mobile Army Surgical Hospital in South Korea during the Korean War.

“The Resident” revolves around the lives and actions of staff members at Chastain Park Memorial Hospital located in Atlanta, Georgia. The characters, Conrad Hawkins as the third-year resident and Devon Pravesh as the intern, explore the inner workings of the duties in the emergency room and hospital medicine. The show goes deeper and delves into the medical malpractice and deliberate violations of medical ethics as well as the bureaucracy of the healthcare industry.

The comedy-drama of “Scrubs” was a one of a kind medial show. The first eight seasons had episodes beginning with the title “My” as if the main character, Dr. John Michael “J.D.” Dorian was writing in a diary. J.D. narrates most of each episode, giving viewers a perspective into his mind. He also has some very comical daydreams along the way. In addition to the goofy moments, the show has been praised as the most accurate portrayal of the medical profession on TV. Most of the actors and actresses were able to improvise their lines too! 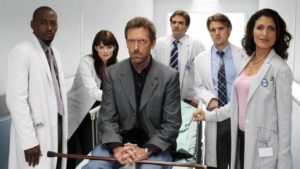 Dr. Gregory House uses Sherlock Holmes type skills to deduce medical diagnoses. Set in a fictional hospital in New Jersey, House is able to get to the root of medical puzzles using his instincts and some very unconventional techniques. Despite all of his amazing qualities, House tends to be brutally honest and antisocial. This show has a very unique spin on medicine and depicts departments that are not typically mainstream.

“Grey’s Anatomy” is the longest running medical drama in television history and has been ranked the No. 2  drama across all of broadcast television. Known for its diverse cast and interesting storylines, “Grey’s Anatomy” has been the leading medical drama for over a decade. This binge-worthy show depicts real situations that doctors and nurses face on an almost daily basis. If anything, it’s worth the watch for lead character Derrick Shepard, a.k.a McDreamy.

Healthcare facilities operate in high stress environments and serve people when they are generally at their worst. Preparing these hospitals, out-patients facilities, and traveling nurses for any and everything is essential for them to get their job done well.

Implementing an efficient mass notification system can quickly inform the appropriate people of any emergencies. From using a poll application for staffing shortages to having pre-set templates for emergency preparedness, there’s a lot that healthcare facilities can do to improve their patient care with the right tools and technologies.

Rave Notifier for Desktop: What Should You Know and How Can it Help?